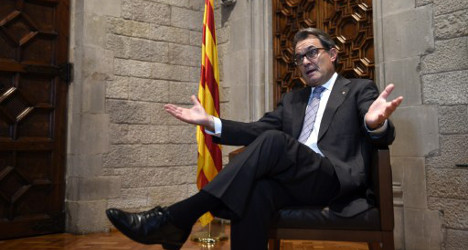 Artur Mas has defied Madrid by calling a vote on independence for the rich northeastern region on November 9. Photo: Lluis Gene/AFP

Artur Mas, who has defied Madrid by calling a vote on independence for the rich northeastern region on November 9, predicted Scotland would stay in the European Union even if it chooses independence and drew hope from that for his own cause.

"If the Catalan population wants to vote on its future, it's practically impossible to stop that forever," Mas told AFP in an interview on the eve of Catalonia's annual national day, the Diada.

The commemoration this year is more politically charged than ever, coming just a week before Scotland holds a referendum on independence from the rest of Britain, and less than two months before the date set for the Catalan vote.

Spain's national government fiercely opposes any move towards independence for Catalonia. It has branded the planned vote illegal and vowed to block it.

"I think it's absurd to pretend that could be so and I think the Spanish government will have to realise that," Mas said.

In contrast to Madrid's stance on Catalonia, the British government has agreed to let Scots vote in a referendum even though it is against Scotland breaking away from the United Kingdom.

Mas said Scotland's vote could smooth the way for Catalonia on its own drive for independence.

"If a nation such as Scotland can vote, why not Catalonia?" Mas said.

EU officials have warned that breaking away from the United Kingdom would leave Scotland automatically out of the European Union.

"If the 'Yes' wins, I am sure there will be negotiations very quickly, even immediately, to try to keep Scotland in the European Union," Mas said.

"I am certain that pragmatism will prevail as it always has in the EU."

Catalonia accounts for a fifth of Spain's economy but it was hit hard by the financial crisis that broke out in 2008, fuelling a surge in pro-separatist feeling.

Mas has vowed to pass a new regional law that he says will allow him to push ahead with the "consultation" despite Madrid's resistance, but his efforts risk being thwarted by Spain's Constitutional Court.

"It is not pragmatic to deal with these political issues purely from a strictly legal point of view," he said on Wednesday.

"A solution must be found so nations that have a true calling in Europe can stay in the European Union. I cannot imagine Catalonia outside of a Europe that we have helped to build."

Thursday's Diada marks the date many in the region see as the day Catalans lost their autonomy, when the city fell to Spanish and French forces in the War of the Spanish Succession that redrew the map of Spain.

Mas kicked off commemorations on Wednesday evening to mark the 300th Diada by laying a wreath at a mass grave for Catalans killed in the 1714 siege of Barcelona.

On Thursday afternoon supporters of independence will mass along two central Barcelona avenues in the shape of a giant letter V for "vote", which they hope will stretch for 11 kilometres (nearly seven miles).

Organisers say more than half a million people have signed up for Thursday's demonstration.

South of Barcelona in the coastal town of Tarragona on Thursday, the Catalan Civil Society movement which favours staying with Spain has called for a rival gathering to denounce independence as a "dead end".