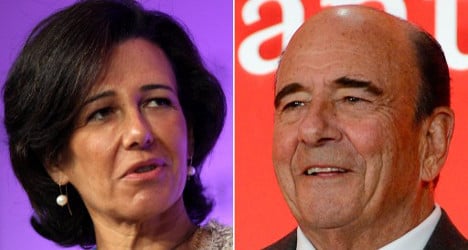 Ana, the eldest of Botin's six children, was the first woman to lead a major bank in Britain when she took over as chief executive of Santander UK in 2011. Photo: Javier Soriano/Ben Gurr/AFP

Emilio Botín, a controversial figure who had steered the eurozone's biggest bank by capitalization through Spain's financial crisis, died overnight aged 79, the bank said in a statement.

The appointment of his daughter, who became the first woman to lead a major bank in Britain when she took over as chief executive of Santander UK in 2011, marks the fourth generation of the family to chair the lender.

The board said the Harvard-educated 53-year-old was the "most appropriate person, given her personal and professional qualities, experience, track record in the group and her unanimous recognition, both in Spain and internationally".

But some critics argued a publicly-held bank shouldn’t be governed like a family dynasty.

Emilio Botín was one of the most powerful men in Spain, where critics branded him a symbol of excesses in the banking system which sparked a ruinous property crash – although his own bank survived it.

He took over from his father as Santander's executive chairman in 1986 and expanded it, fusing it over time with entities such as Britain's Abbey National and others in Latin America.

Botín's sudden death, weeks before his 80th birthday on October 1, "was a surprise and a great blow", Rajoy told reporters at parliament.

Business magazine Forbes estimated the fortune of Botín – whose surname happens to mean "loot" in Spanish – at €1.1 billion (1.4 billion).

Leading the international expansion of his bank, named after its hometown in northern Spain, Botín would entertain foreign journalists by joking about his strong Spanish accent when he spoke English.

A patron of science and the arts, he enjoyed the smooth image of a neatly-groomed bald executive in his trademark red tie, known to his managers as "El Presidente".

He kept a collection of art and groves of olive trees at Santander's vast headquarters on the outskirts of Madrid and was a keen golfer and fan of Formula One racing.

Botín was long courted by politicians but drew howls of anger from protesters in the street amid the crisis that led Spain close to financial collapse and rattled the eurozone in 2012.

"Botín, the party's over!" demonstrators would yell, as the country's finance sector slid towards a 41-billion-euro (53 billion) bailout by its eurozone partners.

The biggest bank by market capitalization in the eurozone currently valued at €91.6 billion , Santander itself survived the crisis, but Botín's image suffered.

In 2013 he was summoned to court to testify over Santander's role in the stock market launch of Bankia – the group whose spectacular collapse and emergency nationalisation precipitated the bailout.

Previously, he had been cleared in 2005 of embezzlement accusations and in 2012 of alleged tax fraud.

The collapse of the property market plunged Spain into a deep economic crisis from which it is only now recovering at the cost of deep reforms, with millions out of work.

The bank said in a statement on Wednesday that Botín had died overnight, with a bank spokesman confirming separately that it was due to a heart attack.

"I hope that the things remaining to be settled will be settled as quickly as possible and that the bank will continue to be a great ambassador for brand Spain and will carry on acting as a great financial entity for these times," Rajoy said.

Santander's shares fell 0.65 percent to end the day at €7.70 on the Madrid stock exchange on Wednesday, compared to a 0.13 percent drop in Ibex-35 index of leading shares.