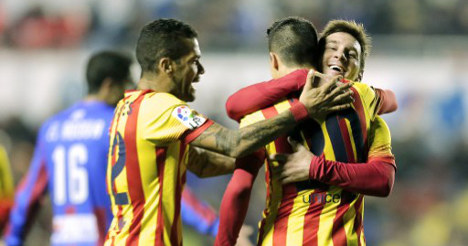 The match against Bilbao, from Spain's Basque region which has also seen separatist tensions, will be held at the Camp Nou stadium. Photo: José Jordan/AFP

The club announced on Thursday, Catalonia's annual commemoration of its loss of sovereignty, that it would change its shirt from its usual maroon and blue colours.

Barcelona said it had been given approval by the Spanish Football League.

The match against Bilbao, from Spain's Basque region which has also seen separatist tensions, will be held at the Camp Nou stadium.

"The club's board of Directors had requested the change in strip, which features a design based on the Catalan flag, as part of the commemorations to mark the 300th anniversary of the September 11 siege of Barcelona in 1714," said a Barcelona statement.

The club said it was "unanimous" in wanting to use the colours of the Catalan flag known as the Senyera. Barcelona played one game last season in the Senyera colours.

Spanish and French forces took Barcelona in 1714 as part of the Spanish Warof Succession.

Hundreds of thousands of people were expected to take to the streets of Barcelona on Thursday as part of the commemorations.

Catalonia's government wants to hold a vote on independence on November 9.

The central government in Madrid is fiercely opposed to the move.