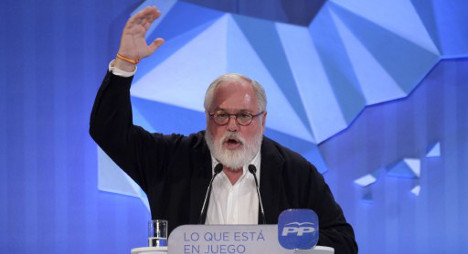 Cañete is likely to push for the Iberian Peninsula to replace Russia as the main interconnection point to Europe for the supply of gas. Photo: Pedro Armestre/AFP

A leaked document by European news site EurActiv suggested the MEP with Spain's ruling conservative Popular Party would be assigned the lesser portfolio of research and innovation, but the outcome has been far less negative for Cañete.

Although France and Britain have secured top positions in economic affairs and financial services respectively, Spain will play a bigger role than initially expected with Cañete’s new post, given the recent gas conflict between the EU and Russia.

It will also allow Spain’s ruling party to push for the Iberian Peninsula to replace Russia as the main interconnection point to Europe for the supply of gas (through pipes from Algeria), electricity and renewable energy.

“The energy post is fundamental for Spain and Europe for everything that has to be decided in the coming years,” Spanish vice-president Soraya Sáenz de Santamaría told news agency EFE.

Cañete seemed to have dented his chances of nabbing the agriculture post he initially wanted after he claimed last May he had gone soft on his socialist rival during a political debate because she was a "defenceless woman", comments that received global attention.

“I’m convinced Mr. Cañete will make it clear from the start in the European Parliament that he isn’t what people think he is,” Spain’s edition of The Huffington Post reported Juncker as saying.