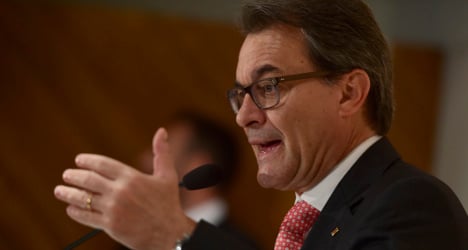 "The consultation is not legally binding. It could have political consequences" but "it won't have any immediate legal consequence," Mas told some 250 business leaders at a lunch organized by the Barcelona Chamber of Commerce.

Many of the region's business leaders have expressed concerns that Catalan independence could seriously hurt their bottom line.

But Mas stressed there was "no predetermined result" for the poll and that some were "confusing the consultation with "independence" — a veiled reference to Spain's central government which staunchly opposes the planned November poll.

The Spanish parliament has also ruled the unilateral vote is illegal.

However, the Catalan President on Thursday said the vote was about testing the waters on the whole issue of independence to see "where the majority stand".

He also argued the Catalan independence would have "very little impact" on businesses, although he conceded no one would come out scot-free.

Estimates put forward by Catalan pro-independence lobby group CATN suggest independence would have a high initial start-up cost for the region of €4 billion ($5.2 billion) to €5 billion a month.

However, the region would soon have an annual surplus of around €11.5 billion a year, with the extra money coming from taxes, and social security payments paid by companies.

"Those who want liberty for Catalonia have to know that it comes at a price, but not having it (liberty) also (has a price), perhaps higher," Mas warned.

– "Do you think that Catalonia should be a State, yes or no?"

– "If yes, do you want that State to be independent, yes or no?"