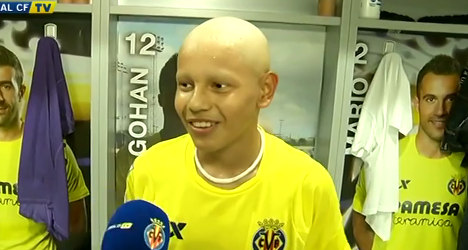 "I dreamed every night about going out onto the ground as one of the players. It was hard to sleep," said Gohan of the weeks before the match. Screen grab: Villarreal CF/YouTube

A few months ago, Valencia teen Gohan was diagnosed with the second cancer of his short life.

Having survived lymphatic cancer five years ago, the boy learned he would now have to battle with a rare form of the disease known as Ewing's sarcoma.

But on Thursday night Gohan had an opportunity most people his age can only dream of.

During the friendly between Spain's Villarreal and Celtic, he not only started in a team kit bearing the number 12, he was also allowed to score a — very clever — goal.

After hitting the back of the net, players from the team known as the 'yellow submarines' carried Gohan on their shoulders.

He was then subbed off, with Villarreal going on to win 5–2.

"Everything Gohan has experienced in the last few days has been very important for him," the boy's family told Spanish sport's newspaper Marca.

"We said to him that despite all his suffering, life has given him the opportunity to experience all this," they added.

The match has had a lasting benefit too, with Gohan more comfortable with this disease.

"He takes his cap off more now, whereas before it was a real effort for him to do that," his parents told Marca.

Villareal and Celtic have worked together since 2004 to collect funds and raise awareness for children with cancer.