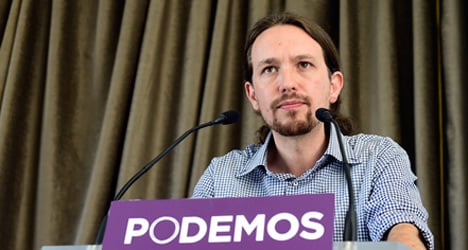 Iglesias said that the visit was to "find out the consequences of the most recent military operation" in Gaza. Photo: Gerard Julien/AFP

The 'United Left'  delegation landed in Tel Aviv on Wednesday for a planned three-day fact-finding mission, which Iglesias said was about seeing "the consequences of the most recent military operation, which has lasted for seven weeks, of Israel against Gaza."

As part of the trip, the joint group of five Spanish politicians and eight Irish, French, Portuguese and Cypriot Euro MPs had intended to meet both Israeli and Palestinian civilians.

But Israel moved quickly to block the visit. Spanish daily 20 Minutos reported Iglesias as saying, "We don't know why. We're European Parliamentarians and we want to help humanitarian aid to increase. I think the Israeli government should allow us into Gaza".

Diplomatic sources said that Israel felt uncomfortable with the visit due to public statements made by some members of the delegation.

Israeli spokeman Emanual Najshon said that the visit was not considered official and would be seen as a show of support for Hamas.

"We allow official delegations and humanitarian aid to enter Gaza but this group, in our opinion, is in practice a private one," he commented. "It would strengthen Hamas and Israel has no interest in doing that."

"If they want to go to Gaza, they can get there through Egypt," he added.

Pablo Iglesias's Podemos (We Can) party has only been in existence for nine months but it has rapidly risen in popularity and now narrowly trails the main opposition Socialist PSOE party in Spanish polls.

It campaigns on an anti-austerity platform and has attracted attention partly as a result of a series of successful TV debate performances by its leader.