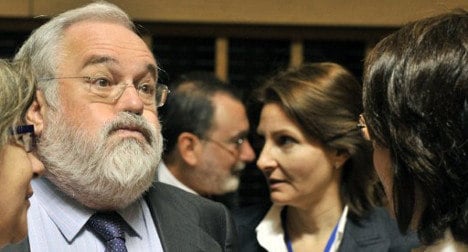 Cañete claimed he had gone soft on a rival female politician during a May political debate because she was a "defenceless woman": Photo: Georges Gobet/AFP

Cañete, an MEP with Spain's ruling conservative Popular Party has been assigned the lesser portfolio of Research and Innovation, according to the leaked document published by European news site EurActiv.

While the document dated September 2nd is far from final, the decision would be a blow to Spanish Prime Minister Mariano Rajoy as he hopes to see the former Spanish agriculture minister — Spain's only European Commissioner — land the key EU farm policy role.

According to the draft EU document (see the details here), that position will now go to Irish politician Phil Hogan.

The Popular Party refused to comment on the leak when contacted by The Local, saying nothing had yet been finalized.

Cañete may have dented his chances of nabbing the agriculture role after he claimed he had gone soft on his socialist rival during a political debate because she was a "defenceless woman", comments that received global attention.

The former agriculture minister was also widely mocked by the Spanish press for an electoral stunt which saw him boarding a tractor.

A final line up expected to be announced in coming days.

In other frustrating news for the Spanish government, Spain's economy minister Luis de Guindos, widely tipped by many to become the next leader of the Eurogroup forum of eurozone finance ministers, may have to wait for up to a year before he finds out if he has landed the role.