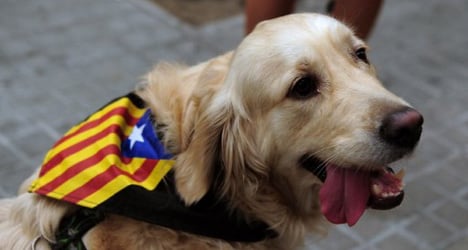 Supporters of Catalonia's right to vote on independence will take to the streets on its national day, September 11th, ahead of the planned November consultation. Photo: Lluis Gene/AFP

In an article on Wednesday about Scottish independence, titled "Scotland's Identity, Put To a Vote", the newspaper's editorial board wrote: "Globalization and loss of empire have weakened a shared British identity, and the European Union has made it possible for distinct peoples like the Scots, Catalans or Basques to contemplate going it alone."

The proposed Catalan consultation on independence, due to be held on November 9th, is fiercely opposed by Spain's central government.

The country's parliament has ruled the consultation illegal and Prime Minister Rajoy has threatened to use the Constitutional Court to prevent it going ahead.

But the NYT wrote that it was a "testimony to democratic values in Britain and in Spain, where a vote on Catalonia’s independence is scheduled for November, that the question can be put to the people peacefully — in stark contrast to Russia’s armed campaign to punish and dismember Ukraine for trying to break out of the Kremlin’s orbit".

Opinion is split in Spain over whether or not Catalans should have the right to vote on independence.

The Spanish government has maintained a hard-line stance on the matter but some opponents of Catalan independence concede that the people of the region have a right to choose.

Catalan president Artur Mas has vowed to press ahead with the consultation despite the political resistance from Madrid.