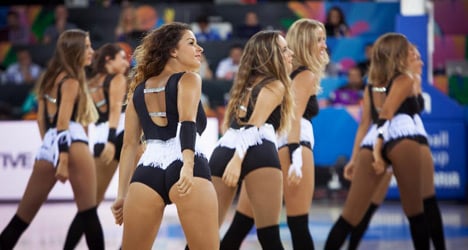 The basketball world cup cheerleader troupe were said not to be offended by the off-the-cuff comment. Photo: Desiree Martin/AFP

Carlos Olías de Lima, better known as 'Charly',  denied on Wednesday that he had been fired for his comments but confirmed that he had decided to give up his role as stadium announcer at future games.

"I think it's for the best," he told local radio station Onda Vasca.

According to Spanish daily 20 Minutos, Olias de Lima had apologized directly to the Dreamcheers cheerleaders for his off-the-cuff remark, made as they finished performing a routine based on an Enrique Iglesias hit, 'Bailando' during the interval of a game between New Zealand and the Czech Republic.

"They hadn't felt offended at any time," he said.

The song's Spanish lyrics contain the phrase, "I want to be with you, live with you, dance with you, spend a crazy night with you…", which prompted Olías de Lima's unfortunate improvised remarks.

Officials from Spain's basketball federation were reportedly infuriated by the incident and although it was reported in Spanish press that Olías de Lima had been fired, a later statement revealed that he had stepped down "by mutual agreement".

Charly worked as the public announcer at the Bizkaia Arena for 12 years. He is also a member of the Basque Country referees committee.

"Basketball is the sport of my life, one I love and respect and I don't want it to be damaged, " he said. "In a way, I feel helpless because of a comment that wasn't meant to hurt or offend anyone but has become a big deal."