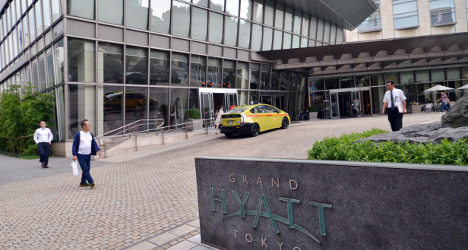 The man is suspected of assaulting a woman, in her 20s in a toilet at Tokyo's Grand Hyatt hotel in May. Photo: Yoshikazu Tsuno/AFP

Officers would like to question Antonio Alvarez, 45, over an incident alleged to have occurred at the prestigious luxury hotel where suites can cost around $5,000 a night, in the glitzy nightlife district of Roppongi.

Alvarez is suspected of assaulting the woman, in her 20s, in a toilet at the hotel in May, just five months after he assumed the role, Kyodo News reported, citing unnamed police sources.

After the alleged incident was reported, Alvarez visited a police station where he denied the claim, Kyodo said, adding that a police DNA test of substances found on the woman appeared to indicate sexual activity had taken place.

Private broadcaster TBS said Alvarez — who said "no comment" when questioned by its reporter — had told police he had only directed the woman to the lavatory.

Citing police sources, Kyodo said Alvarez had left Japan but would be arrested if he re-entered the country.

A spokeswoman for Grand Hyatt Hotels and Resorts in Japan told AFP an incident between Alvarez and a customer occurred at the hotel on May 30 "and since then we've been fully cooperating with the police with the aim of discovering the truth".

Alvarez left the hotel on August 7th after two months of home leave, she said.

"Although he has not been proven guilty, we apologize to our customers… for all the fuss around the incident," she said.

"We will take improvement measures once the process of fact-finding is over," she added.