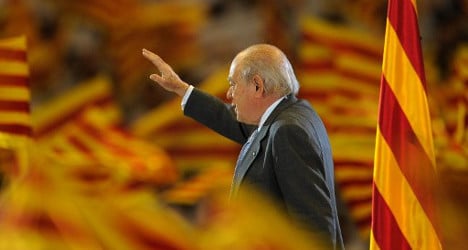 The once revered Catalan leader is asking the Parliament to postpone his hearing to “divert as little attention as possible” from a “high-voltage political agenda”. Photp:

Pujol wrote a letter to Catalonia’s speaker of the house Núria de Gispert on Tuesday suggesting his trial be delayed until September 22nd to not divert attention from two key events for the future of the region.

The first is September 11th’s Diada, Catalonia’s national day, which pro-independence supporters hope will illustrate the mass support their cause has among the 7.6 million people living in the north-eastern Spanish region.

The other key event is the passing of a parliamentary bill which the regional government believes will legalize a November 9th independence referendum being spearheaded by Catalonia’s current regional president Artur Mas.

The vote has been deemed illegal by Spain's ruling conservative Popular Party (PP), who say they will appeal to the country's Constitutional Court if it is approved by the regional government.

Jordi Pujol, who was president of Catalonia from 1980 to 2003, stunned supporters when he announced last July that his family had hidden an inheritance from his father in offshore accounts for the past 34 years.

A right-wing Spanish public sector union called ‘Clean Hands’ filed a lawsuit against the once revered ex-president in mid-August, accusing him of siphoning off €18 million ($24 million).

Now, the 84-year-old is asking the Catalan Parliament to postpone an appearance in which he will explain his financial affairs in order to "divert as little attention as possible” from a “high-voltage political agenda”.

Pujol even went as far as stating that he “wasn’t forced” to appear as he was no longer serving as a politician but that he would do so anyway given the “high regard” he holds for the Catalan Parliament, local daily La Vanguardia reported.

Spain’s finance minister Cristóbal Montoro used his first post-summer appearance in the Spanish Parliament in Madrid on Tuesday to ensure Pujol knew he would be investigated for tax fraud.

“If Mr. Pujol thought that by asking for forgiveness publicly he could clear the slate he was mistaken,” Montoro said.

“The Finance Ministry will go to the very end in the pursuit of tax fraud.”

The spokesperson for the Catalan government Francesc Homs was heavily critical of Montoro's words saying they were more worthy of a "political commentator than a minister".

He accused the finance minister of using state structures for party political ends.