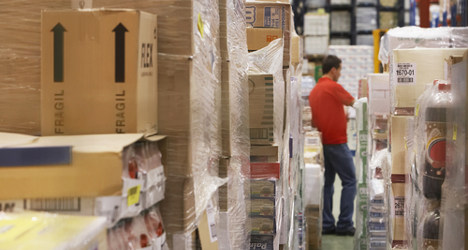 Photo of a warehouse: Shutterstock

While wage growth across the OECD has been relatively flat in the last two years, Spain's salaries have continued to fall an average of two percent a year since the country's economic crisis began, according to the organization's newly published Employment Outlook 2014.

That's around the same level as in Slovenia and Ireland, the report shows.

Only Greece has suffered more, the OECD says, with the salary slide at the other end of the Mediterranean a hefty five percent.

The fall in wages is a double blow for struggling economies like Spain, according to the OECD — a 34-country bloc with a strong trade and growth agenda.

Not only are there less jobs — almost one in four Spaniards are out of work — but those in work are earning less than they were before the crisis.

Before the crisis hit in 2007, eurozone salaries were climbing 2.1 percent a year, the OECD's  Director of Employment, Labour and Social Affairs Stefano Scarpetta said as a point of comparison.

He said employment costs in Spain had veered upwards when the country started using the Euro, but that the crisis had pushed these down.

Scarpetta went on to warn that further wage cuts would cause more economic hardship, causing deflation and acting as a dampener on demand.

"Policy makers must ensure in particular that any further wage adjustments are not concentrated among low-earners," the OECD said on Wednesday in a statement.

The OECD has also expressed concerns over a "damaging reliance on temporary work" in Spain, noting a falling number of ongoing positions in the country, with these positions only making up 24.5 percent of all jobs in the country.

In slightly more positive news, the authors of the Employment Outlook 2014 forecast that Spain will see the best job creation figures in the OECD up to the end of 2015.

The country's jobless rate will slip by 2.2 percent in that period but will still remain at a very high 23.9 percent.

For the OECD more generally, the Employment Outlook 2014 report says that average jobless rates will decrease slightly over the next 18 months in the OECD area, from 7.4 percent in mid-2014 to 7.1 percent at the end of 2015.

"Policy makers should prioritize efforts on helping the long-term unemployed back to work through more personalized job-search assistance and training programmes, the OECD said on Wednesday.