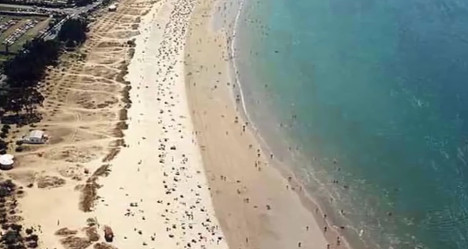 Readers of Spain's free daily 20 minutes have once again voted for their favourite beach in the country. But if you think the winner might be San Sebastian's famous Concha Bay or Galicia's Playa de las Catedrales, you'll have to think again.

For the third year in a row, another Galicia beach has topped the polls: the 1.3 km (0.8 mile long) Playa Grande de Miño.

The long, curving beach with white sand in the northern region's La Coruña province was voted for by 27,000 readers of the Spanish daily.

Another Galician beach — rigged voting anyone? — came second in the poll: the Playa de Gandarío, while third place went to the desert-like and honey-coloured Canary Islands beach of Playa de Maspalomas.

But while these are all more than worthy choices, it's very hard to pick a top beach in a country with around 5,000 kilometres (3,100 miles of coast).

Some people prefer rocky coves such as those seen in Costa Brava, while the Canary Islands boast beaches with black, volcanic sands, and Andalusia even features a beach with Roman remains in Bolonia.

What's your favourite beach in Spain? Let us know in the comments field below.