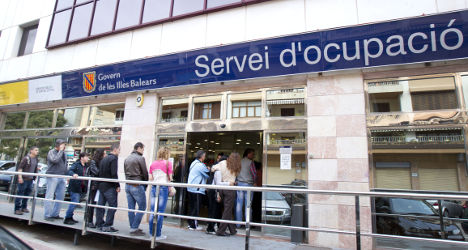 Some 93 percent of the new jobs created in August in Spain were temporary positions. Photo: Jaime Reina/AFP

The rise means there were 4,427,930 Spaniards registered as looking for work at the country's unemployment offices the end of August, the figures from Spain's employment ministry show.

Spain usually experiences a rise in unemployment numbers in August, with the average rise for the month over the last decade being 49.025, according to the employment ministry. In 2013, however, unemployment fell by 31 in the eighth month of the year.

"The result for the last month was possible to predict given there's a strong seasonal effect in August independent of the general state of the economy," Secretary of State for Social Security Tomás Burgos said on Tuesday.

"The outcome allows us to maintain our forecasts in terms of our job growth expectations in the medium term," he added.

The August unemployment figures mean there are now 270,853 fewer people registered as looking for work in Spain than a year ago.

A total of 72,955 contracts for ongoing positions were also signed in August, up 16.81 percent on a year ago.

However these ongoing contracts represented only 6.43 percent of all the contracts signed in August, with 1,135,109 temporary contracts making up the remainder of the new positions created.

Spain's registered unemployed list, produced by the employment ministry, is a different measure from the survey-based benchmark quarterly unemployment rate published by the national statistics institute.

The institute recorded 5.5 million unemployed in Spain in June, yielding an unemployment rate of 24.47 percent. That was lower than the previous quarter but still one of the highest rates in the developed world, second only to Greece in the eurozone.

The high figure reflected the lingering impact of the busting in 2008 of a building boom, which sparked five years of stop-start recession in the eurozone's fourth-biggest economy.