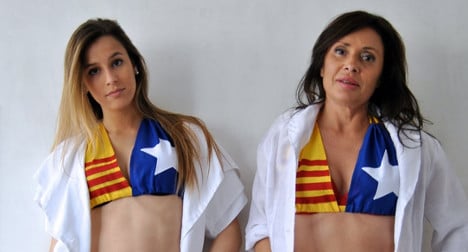 Is this the most innovative way to draw more men to the Catalan independence cause? Photo: Botigues independentistes

September 11th is ‘Diada’ day in Catalonia, commemorating the defeat of the region during the War of Spanish Succession and a key date for Catalan nationalists.

Last year, the yellow and red colours of the Catalan ‘estelada’ flag took over almost every corner of the north-eastern Spanish region, as a human chain some 400 kilometres (250 miles) long stretched through towns and villages calling for independence.

Shop owners have seen a chance to cash in on this ‘independence fever’, selling all kinds of merchandise featuring the separatist estelada flag, such as motorbike helmets, sneakers and bracelets.

Now, even a bra with the red-yellow stripes and the five-point star has been launched by Botigues independentistes, Pro-Independence Boutiques in English.

According to their Facebook page, three women from the Catalan town of Vic wore three ‘estelada’ bras during a demonstration in 2012, a move which the garment’s current producers claim “caused a huge impact”.

SostenCat, which vaguely translates to CatalanBra, comes in one single size and fits all chest sizes.

Pro-Independence Boutiques even suggest where women should wear their separatist bra: “community festivals, summer nights, at the beach…”

The estelada flag shares the same red and white horizontal stripes as the senyera – the flag of Spain’s Catalonia, Aragon, Valencia and Balearic regions – with the addition of a five point star in a blue triangle.

It is typically used by supporters of Catalan independence from Spain.