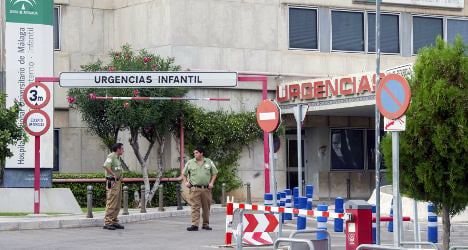 The hospital in Malaga where five-year-old British boy with a brain tumour, Ashya King, was placed after Spanish police located and arrested his parents late on Saturday. Photo: Marcos Moreno/AFP

The arrested parents of a five-year-old British boy with a brain tumour who was taken from hospital without medical consent and found in Spain will appear before a Spanish judge on Monday, a judicial source said.

A police spokesman said that "the child is receiving hospital care, the parents are in detention," adding that the other six children in the family are staying in an undisclosed location, looked after by the adults among them.

Five-year-old Ashya King was removed from a hospital in Southampton in southern England on Thursday, leading police to issue a European arrest warrant for his parents.

They were tracked down to a guesthouse, Hostal Esperanza on the Costa del Sol, around 30 kilometres (18 miles) from Malaga in southern Spain, after they were recognised by an employee.

"It's my colleague that alerted the police," an employee at the hostel told AFP by telephone. "She had seen them on an online newspaper."

Authorities in Britain, France and Spain had been racing against the clock to locate Ashya, who was operated on just one week ago and requires feeding through a nasal tube and a machine, raising fears that it could run out of batteries.

"As you can see, there's nothing wrong with him," said the father Brett King in a video on YouTube posted on Saturday by one of the other children.

"He's very happy since we took him out of hospital, he's been smiling a lot more."

The video shows Ashya sitting on his father's knees and hooked up to the feeding machine.

King says he pulled his son out of hospital because he was upset with the care he was receiving, and wanted to proton therapy, something not offered by the British public healthcare system.

"We are not neglecting him," King says.

He does not explain in the video why the family chose to visit southern Spain but police had earlier indicated the family had "strong links" to the area.

"There are no winners in this situation. I've said all along that this must be a terribly distressing time for Ashya's family and I stand by that now," said Chris Shead from Britain's Hampshire police.

He said the arrest warrant was based around "neglect" but added: "That does not necessarily mean they would be charged with that offence.

"It purely gives us the power to arrest and then we'll be able to speak to them."

King's parents, who are Jehovah's Witnesses, were seen boarding a ferry to Cherbourg in France after taking the boy.

On the Hampshire police's Facebook page, one poster, Katie Fletcher, wrote: "This is my mother's friend, she has run away in desperation because they cannot accept that there is nothing that can be done for their son and want to look for help abroad.

"Please don't judge, they are a very sweet loving family and I can only believe they are doing this because they want to help their son."

The boy's paternal grandmother, Patricia King, said her son and his wife were "marvellous" parents.