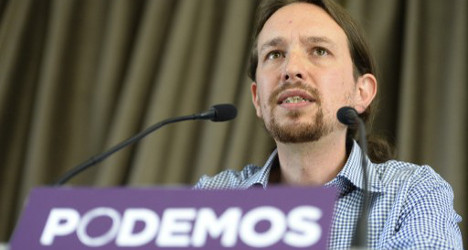 Some 21.2 percent of voters would vote for the nine-month-old Podemos party headed up by Pablo Iglesias, the Sigma Dos poll shows. Photo: Gerard Julien/AFP

Some 21.2 percent of voters would vote for the nine-month-old party headed up by Pablo Iglesias, the Sigma Dos poll published in Spain's centre-right El Mundo newspaper shows.

That puts the anti-austerity party — which raises money through crowdfunding and has used social media to great effect — only just behind parliamentary heavyweights the PSOE, which would pick up 22.3 percent of the vote, the poll reveals.

And while the survey shows Spain's ruling conservative Popular Party would win the elections with 30 percent of the vote, this would see the current government falling well short of gaining an absolute majority in the parliament.

The El Mundo poll figures are a stunning result for Podemos, a party with its roots in Spain's 'indignant' movement which first gained prominence when it picked up 7.9 percent of the vote and five seats in May's European elections.

They are also a slap in the face for the struggling PSOE which appears not to have capitalized on the election of a young new leader in Pedro Sánchez after former leader Alfredo Pérez Rubalcaba quit in the wake of the party's poor showing in the European ballot.

The poll also shows that Spain's United Left (IU) have become something of a bit player in Spanish politics, left behind in all the excitement surrounding Podemos. The party would pick up just 5.6 percent of the vote in general elections, the El Mundo-run survey shows.

At the same time, the latest Sigma Dos results suggest that the results of a poll carried out by government research body CIS in August may not have been as skewed as some commentators suggested.

In that survey, 15.3 percent of respondents said they would vote for Podemos in a general election, while the socialists would garner 21.2 percent of all votes.

Spain's socialists argued the poll had been conducted before the election of their new party leader and were therefore irrelevant.

General elections are expected to be held in Spain in late 2015.