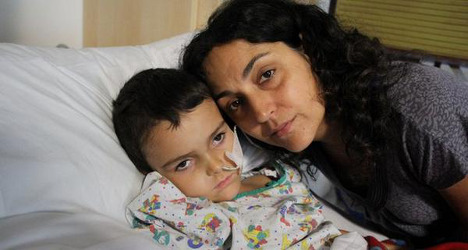 "Ashya has been found," said an update on the website of the Hampshire Constabulary. "He is in Spain with his mum and dad."

Spanish police also tweeted a message about the boy and his parents, adding the boy was now in hospital and that his parents had been arrested over the matter.

The news comes after a European arrest warrant was issued Saturday for the parents of a five-year-old British boy with a brain tumour who was snatched from hospital without medical consent.

The police said they had "positive information" to suggest that Ashya King and his family could be in Spain, where they have "strong links" to the Marbella area on the south coast.

King's parents, who are Jehovah's Witnesses, drove him away from a hospital in Southampton in southern England on Thursday and were seen boarding a ferry to Cherbourg in France.

Interpol launched a missing persons alert following a request from British police, who led the search.

"What that will do is, when we find Ashya and his family, it will allow us to talk to his parents about what happened.

"Clearly we need to find out what their motive is in taking Ashya." He said the warrant was based around "neglect" but added: "That does not necessarily mean they would be charged with that offence.

"It purely gives us the power to arrest and then we'll be able to speak to them."

Spanish police said on Saturday they were looking for the missing child on the Costa del Sol.

In a tweet, posted alongside a picture of the child and his mother apparently taken in a hospital, the force said it was looking in Malaga and Marbella "for a family from the UK. The parents are denying treatment to a child who needs it."

The boy is fed through a tube and the batteries on his feeding system will have expired. Police had a "shrinking window" to find him, Shead said.

He said it was unknown whether the King family had any spare batteries or any way of recharging one.

"I'm sure what they are doing, they think they are doing in Ashya's best interests. But let me assure you, the advice I've been given from doctors today is this is a really quite serious situation for Ashya," he added.

The youngster has undergone extensive surgery and was last operated on eight days ago.

Jehovah's Witnesses are known for refusing blood transfusions on religious grounds, but are otherwise open to other medical procedures.

The group said there was no indication that the boy's parents had been motivated by religious convictions and appealed to them to seek the best medical treatment for him.

On the Hampshire police's Facebook page, one poster, Katie Fletcher, wrote: "This is my mother's friend, she has run away in desperation because they cannot accept that there is nothing that can be done for their son and want to look for help abroad.

"Please don't judge, they are a very sweet loving family and I can only believe they are doing this because they want to help their son."