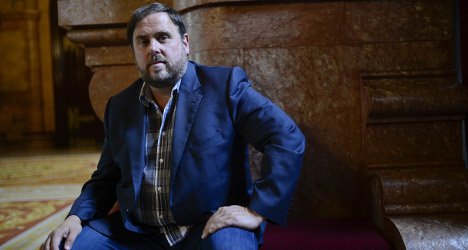 "If I was an investor I would be more calm knowing that there is an independent Catalonia ready to comply with its obligations than having a kingdom of Spain that is in confrontation with its own citizens," Oriol Junqueras, leader of the region's left-wing pro-independence ERC party told UK business daily the Financial Times.

The comments come at a time when Spain's economy is making timid steps towards recovery after years of stagnation and massive unemployment.

Junqueras responded by saying that "pacts must be honoured" — a reference to the fact that his ERC party agreed to work together with the Catalan government to push ahead with the poll.

The vote would gauge the attitudes of Catalonia's population of 7.5 million on the idea of splitting from the rest of Spain.

Many people in the region believe Catalonia pays too much in taxes to the central government and doesn't get enough in return. They also believe Madrid has a belligerent attitude towards the region which has a distinct identity, language and history.

Speaking to the Financial Times, the leader of the ERC said a veto from the Spain's Constitutional Court was insufficient grounds to not push ahead with the poll. He also dismissed called the court as a "political tribunal" controlled by Spain's major parties.

With his comments to the UK paper, the ERC, which gained the highest number of votes in Catalonia in May's European elections, has planted a seed of doubt in the minds of foreign investors.

Critically, he has also stepped up the pressure on the Catalan government and its leader Artur Mas to push ahead with the vote.

"The Spanish state has €1 trillion ($1.3 trillion) of debt. This debt will have to be paid with our taxes, so I don’t believe that the best way for the Spanish state to meet its financial obligations is to clash with its own citizens," Oriol Junqueras told the UK business daily.

In recent months, Mas has been campaigning hard for the November 9th vote despite Madrid stating such a poll would be illegal.

But the new declarations from within the party suggest Mas is now seeking a possible alternatives.

"There are no other counter offers to the (November 9th) referendum at this stage. There is no alternative so the vote has become critical. The issue won't go away," Catalan-based journalist Carme Colomina told The Local recently.