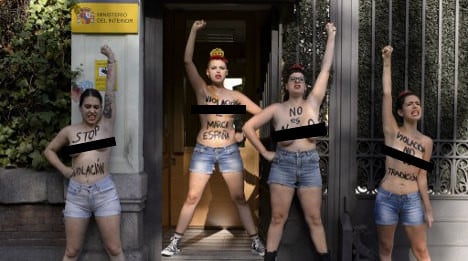 The women called out for “rapists to be castrated” and threw eggs against the building’s façade, as a symbol of men’s testicles being smashed. Photo: Dani Pozo/AFP

The women from the hardcore feminist group posed for photographers outside Spain’s Interior Ministry building in Madrid with messages such as “Rape=Brand Spain”, “No means no” and “rape isn’t tradition” written on their naked torsos.

They called for “rapists to be castrated” and threw eggs against the building’s façade, as a symbol of men’s testicles being smashed (huevos, or eggs in English, is the Spanish slang word for testicles).

The naked quartet were protesting a judge’s decision to drop a case against five men arrested earlier in August over an alleged rape during Malaga’s annual fair.

Police chose not to arrest the Femen activists, unlike on previous occasions.

Spain’s ruling Popular Party has been heavily criticized in recent weeks following comments made by two of their politicians and a “retrograde” anti-rape guide for women published by the Interior Ministry.

Malaga’s mayor himself, Francisco de la Torre, was criticized for playing down the importance of the alleged rape by stating "there are more than a thousand rapes every year in Spain" and "let’s not give the impression that Malaga is unsafe".

But it was the mayor of the northern Spanish city of Valladolid who bore the brunt of the ongoing rape scandal after telling national radio station Onda Cero that rape allegations should be scrutinized and that he would “feel uneasy” about being alone with a woman in a lift in case she wrongly accused him of rape.

Several days after he made the comments, over 500 protesters formed a chain of bras around Valladolid’s town hall and called for his resignation.

Femen is a feminist protest group founded in the Ukraine in 2008 which has gained international notoriety for staging topless demos against sex tourism, anti-abortion laws, sexism and religious institutions.