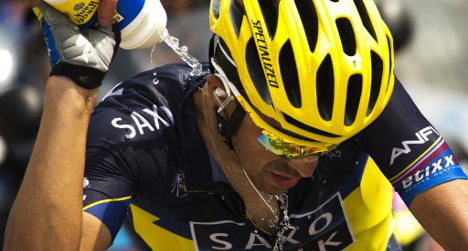 Mercury rising: Spanish rider Alberto Contador had no problem doing the Ice Bucket Challenge as a way of cooling down after one of his races. Photo: Joel Saget/AFP

If anybody needs an Ice Bucket Challenge right now, that’s participants in ‘La Vuelta a España’.

According to cycling website VeloNews, riders in Spain’s answer to The Tour de France are drinking 12 bottles of water during each stage, and a few more if you count those they pour over their heads.

"Air temperatures are pushing 100F (38 degrees celsius), and it's even hotter with the sun beating off the asphalt," VeloNews’s Andrew Hood wrote.

The first five stages of La Vuelta that have already taken place have all been in the southern Spanish region of Andalusia, notorious for its suffocating summer temperatures.

Swiss cyclist Fabian Cancellara tweeted that no matter how much water he drank he was still getting cramps.

To help fight the heat, top riders of the likes of Alberto Contador and Chris Froome are sporting a new “bar vest” which allows them to carry bottles during racing.

Other teams are opting to strap ice packs to the rider’s backs to try and keep their body temperatures under control.