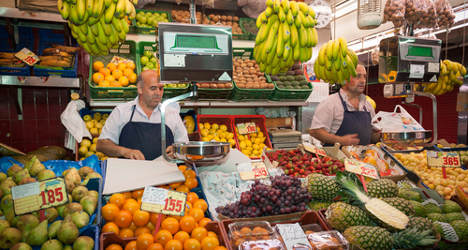 Photo of a market in Spain: Shutterstock

The drop follows a sharper-than-expected fall in consumer prices in July of 0.4 percent on an annual basis due to the lower cost of entertainment, electricity, tobacco and food.

The fall in prices reflects weak domestic demand in Spain, still struggling with a 24.5-percent jobless rate even as the economy slowly expands after emerging gingerly in mid-2013 from a double-dip recession.

The latest inflation report is likely to be of concern to policymakers concerned about deflation, in which falling prices choke off growth.

The European Central Bank (ECB) targets inflation of just below 2.0 percent over the medium term. It considers anything below 1.0 percent to be in a zone posing a risk of deflation.

The ECB has taken unprecedented measures to head off deflation, including the introduction of negative interest rates for banks which want to deposit excess reserves with the central bank.