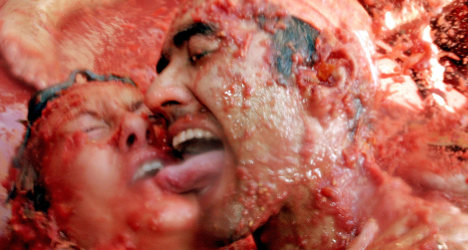 The town hall vowed to improve safety at the wild festival, in which participants drink sangria and splash around in the red juice and pulp.

Before the privatization around 40,000 revellers would cram into the town, quadrupling its population. Places are now limited to 22,000.

Check out the best photos from Spain's La Tomatina festival 2013

"In the past few years the essence of the Tomatina had been lost. There was no space and it was quite dangerous," Buñol's deputy mayor and top Tomatina official Rafael Perez told news agency AFP.

"Now it is much more enjoyable and Buñol locals who had stopped attending are coming back to it."

The entry fee "has enabled us to finance the fiesta and make it safer".

This year organizers have offered 5,000 tickets free to locals, while a further 17,000 have been sold — most via tour companies that bus revellers to Buñol and fill them with sangria and paella.

They have also launched a music festival to keep revellers in town after the one-hour tomato-pelting ritual ends at noon (1000 GMT) on Wednesday.

The privatization of the popular and lucrative event has sparked squabbling among politicians in the town.

Spain's governing conservative Popular Party — in opposition in Buñol — has demanded an investigation into whether it is carried out legally by the town hall, led by the United Left party.

"We cannot look the other way when there has been a suspected case of corruption in an illegal privatization of the festival," the PP's local spokesman Marcial Diaz told AFP.

He said his party supported privatizing the Tomatina but alleged that Spaintastic "was awarded this business arbitrarily without any kind of public contract or bidding process".

"People in Buñol don't understand it. There is great anger about this," he said.

"They are soiling the image of Buñol and of the Tomatina. But we are not worried. We have most of the people of Buñol on our side."

Spaintastic, the company that sells the tickets refused to comment on the controversy when contacted by The Local earlier this year.

Like many Spanish towns, Buñol is deep in debt after Spain's financial crisis.

According to a survey by financial newspaper Cinco Dias based on figures from the Spanish treasury, Buñol was €5.5 million in the red in 2013.

The Tomatina started in the 1940s when locals brawling in the street at a folk festival seized tomatoes from a greengrocer's stall and hurled them at each other.

This year participants will throw 125,000 tonnes of tomatoes produced specially for the Tomatina despite complaints that it is a shameful a waste of food.