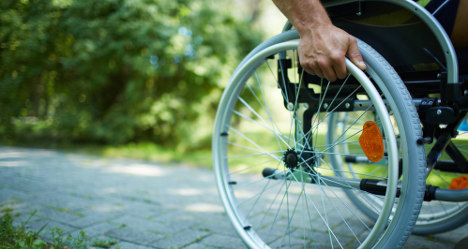 Photo of man in wheelchair: Shutterstock

As in the rest of the world, many Spanish ice bucket challengers posting their videos on YouTube seem to have forgotten what the viral activity is really all about.

"At first it seemed like people didn't know how to donate," Guevara told The Local.

"It was as if all the videos of people pouring ice cold water on themselves were not really informing people about amyotrophic lateral sclerosis (ALS).

"That’s changed now, largely thanks to radio. Without the somewhat distracting footage, we've been given the chance to tell listeners in Spain what ALS sufferers go through and why we need their help."

Guevara is by no means against the viral IBC campaign, calling it "fun" and arguing that at the very least most people have now heard of the neurodegenerative disease.

"The figures are nowhere near those of the American ALS Association but whatever research they can fund with the millions (€10 million–$13.3 million in July) they’re receiving will definitely help our ALS patients too."

ADELA, as Spain’s ALS association is called, uses all the donations it gets on providing treatment to patients rather than looking for a cure.

"There are 2,800 ALS sufferers in Spain, all of whom require physiotherapists to help them fight their loss of bodily movement, speech therapists when they start having trouble talking and general carers to help them with simple, daily tasks."

The non-profit group also cover the cost of any equipment needed to make ALS sufferers’ lives easier, from cranes to communication computers they operate with their mouths.

ALS, or ELA in Spanish, sees patients suffer from increasing muscle atrophy. They also have difficulty with speaking and breathing as their muscles and spinal chords lose nourishment and weaken.

“We have to pay for their treatment because Spain’s health ministry only gives subsidies to (serious) grade three disabilities, or people who are completely dependent on others,” Guevara explains.

"Those who are grade two but struggle with the simplest of tasks get nothing. They’re often left waiting for months to be evaluated or to be given financial cover, meaning their condition rapidly worsens and they’re left bedridden."

Guevara, president of Spain’s ALS Association, is still positive about what’s resulted from an awareness campaign she labels as “unique”.

"ALS has played a large part in my life as family members have died from it and I've been part of the association since 1995. We've never ever been given so much attention as now."

If you want to find out more about ALS and how to donate or volunteer, click here.