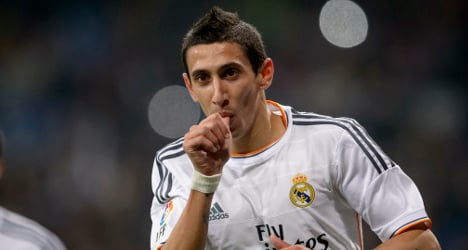 "Unfortunately, today I have to leave, but I want to make it clear that was never my wish," Di María said in an open letter to Madrid sports daily Marca. Photo: Dani Pozo/AFP

Real boss Carlo Ancelotti had repeatedly stated over the past week that Di Maria had demanded an exit from the Spanish capital.

The 26-year-old denied those suggestions, but did hint that the reason behind his departure had been the club's failure to give him an improved contract after his man-of-the-match performance as Real won their 10th European Cup against Atletico Madrid in May.

"Unfortunately, today I have to leave, but I want to make it clear that was never my wish," Di Maria said in an open letter to Madrid sports daily Marca.

"After winning the 10th European Cup, I went to the World Cup with the hope of receiving a gesture from the board.

"They talked about many things and many lies. They always wanted to place the initiative on me for leaving the club, but it was not like this.

"Unfortunately I am not to the footballing tastes of some people. The only thing that I asked for is something that would be fair.

"There are many things I value which have nothing to do with my salary.

"I hope to find those at Manchester United, one of the biggest clubs in the world, and hopefully I can make history."

Di Maria is believed to have become increasingly frustrated when Real president Florentino Perez also splashed out over €100 million on World Cup stars James Rodriguez and Toni Kroos, pushing him down the pecking order at the Bernabeu.

However, he received a standing ovation from the home fans when he appeared as a late substitute in his last game for Real in the first leg of the Spanish Super Cup against Atlético last week.

"The memory of this moment when the Bernabeu rose and I received the immense love of the fans in the Super Cup will live with me forever," he added.

"I had goosebumps. I could not have had a better goodbye for what was unfortunately my last game."