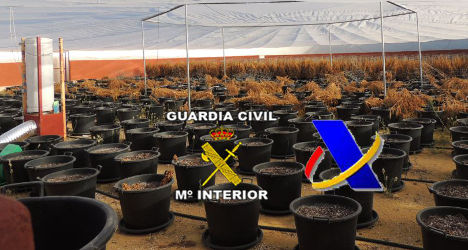 "The bullring had been covered with material which transformed the arena in two large greenhouses," Spanish police said. Photo: Spanish Interior Ministry

Officers swooped on the bullring on a farm in the town of Almogia near the tourist resort of Malaga on the southern Costa del Sol last Wednesday after a Spanish customs service helicopter spotted the operation during a patrol, the ministry said in a statement.

"The bullring had been covered with material which transformed the arena in two large greenhouses," it said.

"It is estimated that the greenhouse could hold up to 10,000 plants," it added. "Most of the plants had been harvested and were being prepared for consumption."

Police said they detained two British men who were harvesting the plants.

Another British man was held after a raid on a smaller marijuana farm in the nearby town of Casares that police believe was part of the same pot-growing operation.

Police arrested four other people as part of the investigation and seized 526 marijuana plants, three cars, two motorcycles and €1,160 ($1530) in cash.

Spanish police also found another, less extensive marijuana plantation in the nearby village of Casares, with another Brit arrested there.