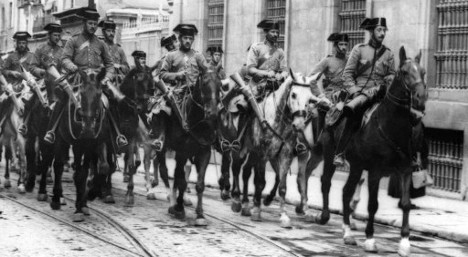 The mayor's controversial comparison has been interpreted by some critics as insulting to Spain’s current Civil Guard officers. Photo: STF/AFP

Jerónimo Guerrero, Socialist mayor of El Coronil (near Seville), has caused a storm with his choice of words and imagery, particularly as it coincided with the death of three Civil Guard police officers in a helicopter accident on Sunday.

The black and white photo he posted on his Twitter account showed ‘Guardias Civiles’ executing two men at close range either during the Spanish Civil War (1936-1939) or in the deeply divisive 40-year-long Franco dictatorship that followed.

Above the image, Guerrero wrote “Damned Jihadi murderers”, presumably as a way of comparing the current murder of Christian children by terror cells in Syria and Iraq with the atrocities of Spain’s bloodiest conflict.

But his controversial comparison has been interpreted by some critics as insulting to Spain’s Civil Guard officers rather than to religious war fighters in the Middle East.

“I’m not criticizing Civil Guards from the democratic period as I fully respect them and work with them on a daily basis,” Guerrero tweeted out.

“Mixing them up with Franco’s Civil Guard, who executed and intimidated in peace time, doesn’t do them any favours,” he admitted, while not offering a full apology for his actions.

The UN recently urged Spain to set up and fund a national search plan to find the bodies of the estimated 100,000 missing victims of the Civil War and of the Franco era, a search hampered by serious budget cuts under the government of Spain's ruling conservative Popular Party.

“Some people are up in arms about genocides but keep quiet about a genocide that took place in Spain for 40 years.”

The Socialist politician says he has received “insults and death threats” on the social media platform following his tweet on Sunday.

His party is now launching an investigation into those carrying the hate speech on Twitter in order to pass on the information to National Police and proceed to possible criminal action.