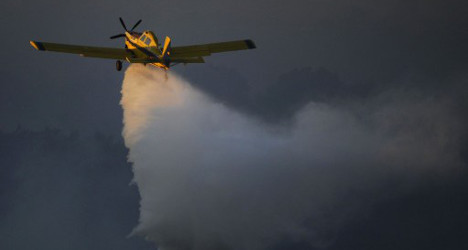 "They obviously miscalculated how much water it was," the head of the skydiving company located at the scene of the accident told The Local. File Photo: Pedro Armestre/AFP

The 51-year-old man was rushed to hospital soon after receiving the water impact while standing at the Empuriabrava aerodrome in northern Catalonia, Spain.

“They had arranged to do it as part of the Ice Bucket Challenge craze in order to raise money for ALS,” Rolf Kuratle, head of Skydive Empuriabrava, told The Local.

“The pilot flew a fire-fighting plane, the kind used to put out forest fires, and dumped the load onto his friend. They obviously miscalculated how much water it was.”

Although initial reports suggested the man had been seriously harmed, Kuratle told The Local he had been informed he was recovering in a Girona hospital and hadn’t sustained any internal injuries.

Hospital sources said on Wednesday the man remained in intensive care in a critical but stable condition, according to local daily La Vanguardia.

The pilot who dumped the water has now been charged with negligently causing bodily harm, Spain's Europa Press said on Thursday.

Thousands of people around the world, including many celebrities, have taken part in the Ice Bucket Challenge since former college baseball player Pete Frates made it go viral.

The 27-year-old suffers from amytrophic lateral sclerosis (ALS), a neurodegenerative disease which causes muscle atrophy, difficulty with speaking and breathing.

As more and more people have posted YouTube videos of themselves being drenched in bucketloads of icy water, the American ALS association has reported an eightfold increase in donations (€10 millon–$13.3 million) last July compared to a year ago.

In Spain, where ALS sufferers struggle to get government health benefits, donations have just begun to trickle in with €25,000 received to date, the country's ALS association has told The Local.