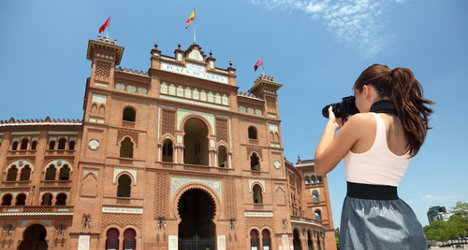 British tourists led the influx in July followed by the French and Germans, the Spanish government said. Photo of a tourist: Shutterstock

Foreign tourist numbers rose to an unprecedented 8.3 million in July, up 5.9 percent from a year earlier, the tourism ministry said in a statement.

"If the trend continues I think we will have a good August, too," Industry Minister Jose Manuel Soria told Cope radio.

Tourism is crucial to the slowly recovering yet jobs-scarce Spanish economy, accounting for about 11 percent of all economic activity.

Spain, the world's third most popular tourism destination after the United States and France, has shown a gradual economic pick-up since emerging from recession in mid-2013 but still suffers from a 24-percent unemployment rate.

British tourists led the influx in July followed by the French and Germans, the Spanish government said.

The most popular destinations were in the northeastern region of Catalonia, the Balearic islands and the southern region of Andalusia.

Holidaymakers are spending more freely, too. In the first half of 2014, foreign tourists spent €26.35 billion ($35 billion), up 7.8 percent from a year earlier, the tourism ministry said.

Greece is also heading for record tourism numbers this year, benefiting in part from a fall in popularity of holiday destinations in unsettled North Africa.