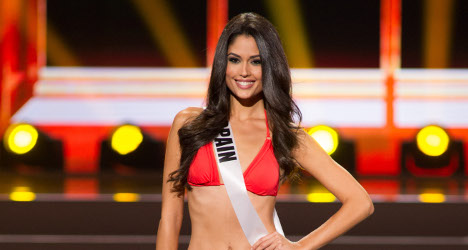 Patricia Yurena Rodríguez has thanked people for their support after posting a picture of herself with lover Vanesa Klein on Instagram. Photo: Darren Decker/Miss Universe Organization/AFP

The picture titled 'Romeo and Juliet' shows Patricia Yurena and her lover, the Spanish DJ and singer Vanesa Klein, gazing lovingly into each other eyes.

Posted on Instagram on Tuesday, the photograph of the model and actress from Santa Cruz de Tenerife in Spain's Canary Islands has received plenty of positive comments and close to 4,500 likes on the site.

"I think it's a great thing for lesbians in Spain," said Judith, whose Lolo boutique in Madrid is popular with the lesbian community.

"It's obviously a personal decision on the part of Patricia Yurena to come out but it means a lot to a group of people who don't get wide recognition in Spain. It's also good for society as a whole," Judith added.

"I don't regret what I did and I did it because I'm happy about what's going on in my life," said Patricia Yurena, speaking to local daily La Opinión de Tenerife about her decision to upload the image.

"I published the picture completely spontaneously and in an impulsive manner. Thank you for all your support," she added.

The controversial Miss Spain beauty contest was banned for many years under Spain's fascist dictator Francisco Franco, only kicking off again in 1961.

Patricia Yurena may be the last ever holder of the crown after the company running the event, Certamen Miss Espana SL, filed for bankruptcy in 2013.