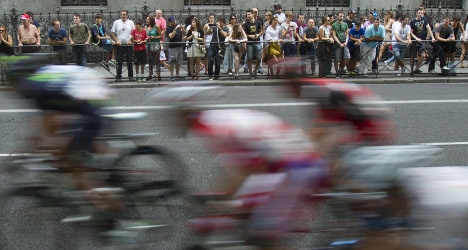 The pack ride during the last stage of the 68th edition of "La Vuelta" Tour of Spain, a 109,6 kilometres ride from Leganes to Madrid, in September 2013. Photo: Jaime Reina/AFP

Froome's defence of the Tour de France was ended by hand injuries after a series of nasty falls just five stages into the race last month, but he has recovered in time to try and make up for that disappointment to take his place as Team Sky leader.

"This is exactly the sort of challenge that I need after the disappointment of withdrawing from the Tour de France," the 29-year-old Kenyan born star said.

For a full list of all the stages, see the bottom of this article.

"You can't dwell on disappointment, you have to move on quickly to the next thing and the Vuelta has become the perfect race for me to focus on."

In a break from tradition the final stage will also be an individual time trial into the northwestern city Santiago de Compostela rather than the final day parade around Madrid.

Sky sporting director Dario Cioni is hoping a fast start can give Froome the upper hand.

"With the team time trial straight away we have an opportunity to give Chris a head start," he told skysports.com

"We've got a strong team here so why not aim to have a fast start and get a good result for the team? And a good result is going to be to try and win the stage."

Movistar's Quintana has been in sublime form this season as he claimed his first Grand Tour victory in the Giro d'Italia in June before also winning on his return to action in the Tour of Burgos last week.

He should also be fresher than his rivals having not competed in the Tour de France despite coming second to Froome in 2013. The 24-year-old, though, has stiff competition just to be the lead rider in his own team as Movistar have named both he and 2009 Tour of Spain winner Alejandro Valverde as co-leaders for the race.

"Having Nairo and Alejandro we have to start with the intention of fighting to win," said Movistar's general manager Eusebio Unzue.

"Nairo, after 70 days without competing, has return to show his professionalism to get to the start line in great condition and we know Alejandro is a very important man for us and can also be in the fight for the general classification."

However, Unzue is still wary of the threat caused by Froome.

"Froome has been dominant in the Grand Tours over the past few years and therefore out of respect he ought to be favourite."

Two-time winner Alberto Contador will also be making his return after a broken shinbone forced him out of the Tour de France. However, the Spaniard has played down expectations that he can challenge for the overall victory given his lack of preparation time.

"But I think I can come into the race thinking about ending the season well and starting next year with more guarantees.

"Perhaps in the last week I will be able to fight for a stage victory."

Spaniard Joaquim Rodriguez is likely to cause a threat in the mountains as he rides for Katusha.