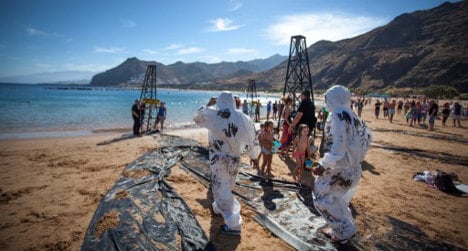 A mock simulation of an oil spill by Greenpeace members on Playa de las Teresitas in the north of Tenerife. Photo: Desiree Martín/AFP

Since Spain’ Government okayed oil giant Repsol’s plans in May, Canary President Paulino Rivero has unremittingly voiced his complete disapproval of a business venture he believes will put the archipelago’s tourism industry “at high risk”.

Rivero has also voiced his concerns over the preferential treatment he believes the Balearic Islands are receiving over the Canaries, as the central government is also studying the possibility of drilling for oil and gas off the coast of the Mediterranean archipelago.

“If we reach the conclusion that for political reasons an environmental ruling blocks oil drilling in the Balearics, as will probably be the case, it will leave ‘Canarios’ in the lurch and very probably cause a break-up in institutional relations,” Spain’s edition of the Huffington Post reported Rivero as saying.

The Canary President is now trying to bring forward a non-binding referendum to early September asking locals if they want the exploratory drilling 50 kilometres (30 miles) off the coast of Lanzorote and Fuerteventura set to commence in October.

Spain’s Industry Minister José Manuel Soria, who is actually from the Canary Islands, has called the referendum “illegal” and “anti-constitutional”.

Rivero responded by arguing it was “legal” and “completely democratic” and that not asking Canarios what they wanted was “disrespectful” and lacking “even the slightest institutional courtesy”.

“It makes no sense to risk the future of two archipelagos which together account for more than 50 percent of tourism revenue in Spain just to benefit a private company,” Rivero argued.