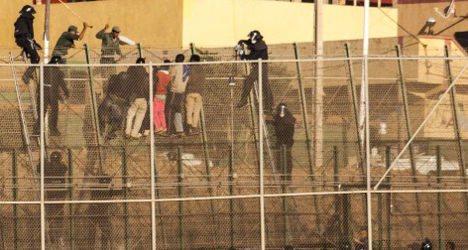 José Colón was one of five journalists hit with a fine after allegedly refusing to move on from the area near the border where they were taking photographs of around 400 Africans trying to enter Spain.

Such mass assaults on Spain's border have become common in recent months as Africans try and enter the European Union via Spain's north African enclaves of Melilla and Ceuta — the EU's only land borders with Africa.

A police report of Monday's incident obtained by Spain's El Diario states the photographers were asked to move on for their own safety and so that they would not impede police work.

Those photographers were "disobedient", refusing to move on and displaying a "scornful attitude", police stated.

But Colón has denied this version of events: "The police allegation doesn't make any sense. When the police ask us to move, we do. We have no interest in confrontation," he said.

"In addition we have never felt in any danger in the presence of the Africans who are trying to enter Spain. The only danger comes from Moroccan police who throw stones at the Africans," he explained.

The journalists have been given 15 days to pay the €150 fine, after which time the sum will escalate, but Colón said he and his colleagues will refuse to pay.

The journalists' fine comes amid high tension at Morocco's land border with Melilla.

On Monday, the international rights group Human Rights Watch published a video dated August 13th showing Spanish police allegedly beating migrants and illegally forcing them back into Morocco when they tried to climb over the border into Spanish territory.

HRW said the police used "excessive force" while the Spanish government said the video was "partial" and "aimed at stirring controversy".