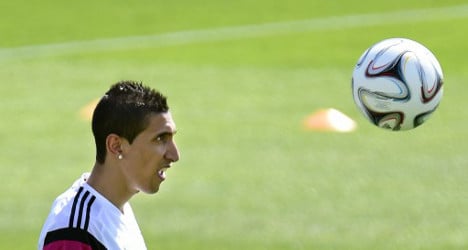 The 26-year-old Argentine — who missed the World Cup final defeat by Germany because of injury — was a star performer as Real claimed their 10th European crown last season, but has fallen down the pecking order at the Bernabeu due to the arrivals of James Rodriguez and Toni Kroos.

"I am surprised to read that there is a disagreement between myself and the club," Ancelotti said on Thursday.

"There is no disagreement and we both think the same way. The situation is clear. The player asked to leave in the summer and rejected an offer from the club.

"Therefore we have tried to look for other players. It is a situation that the player himself has to resolve.

"If he doesn't find a solution for his future, then, come the end of the market, we will make up and he will work for us like he did last season. There won't be any problem."

However, one of the clubs linked to di María French champions Paris Saint Germain look to be out of the running.

PSG coach Laurent Blanc said on Thursday the likelihood of di María coming to the French champions were virtually nil.

"I don't think so," said Blanc when asked whether he would be bringing him to the club.

"The club president (Nasser Al-Khelaifi) told me that it would be difficult to sign him."

Ancelotti also hinted that World Cup winner Sami Khedira could also be set to leave the Spanish capital in the coming weeks.

The German midfielder, who missed the 1-0 win over Argentina because of an injury he suffered warming-up for the final, has been linked with a return to his homeland with Bayern Munich and has rejected an offer of a new contract, with his current deal set to expire in 2015.

Real also received a boost on Thursday ahead of the second leg of the Spanish Super Cup away to Atletico Madrid on Friday as Cristiano Ronaldo returned to training.

The World Player of the Year had to be withdrawn at half-time in Tuesday's first leg, which finished 1-1, due to a hamstring injury.

However, Ancelotti confirmed he will be fit and available for selection at the Vicente Calderon as Real aim to win already their second trophy of the season after claiming the UEFA Super Cup with a 2-0 win over Sevilla last week.