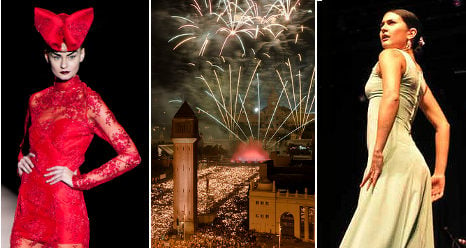 Summer may be nearly over but that doesn't mean there's nothing to in Spain in September. Photo: Stasiu Tomczak/Miquel González Page/Kristy/Flickr

Every year since 1902, the Catalan capital has held a massive street festival — the city's biggest — in honour of the Virgin of La Mercè, patron saint of Barcelona. Over five days, you can enjoy hundreds of activities ranging from street dance shows and theatre performances to concert and folk dances. The festivities include traditional events like the impressive human castles (castellers) demonstrations and parades of 'giants' and 'big-heads'.

These festivities mainly on the typical 'encierros' (running of the bulls events) and bullfights, on horseback or on foot. The celebrations are much anticipated by the whole community, with clubs and associations working for months to make this a successful, fun event.

This wine harvest festival in the Province of Cádiz not only offers a large choice of wine tasting sessions and vineyards tours but also a wealth of activities to chose from, including performances from the Royal Andalusian School of Equestrian Arts, painting exhibitions, Shakespeare plays, flamenco, salsa and entertainment for kids.

First held in 1980, this prestigious flamenco festival is celebrated every two years in the Andalusian city of Seville. The three-week long competition features the greatest dancers, vocalists and guitarists in the flamenco world, as well as as well as up-and-coming artists . Performances take place in different host venues throughout the city, mainly theatres but also in hotels or on the street. There are also courses, conferences and seminars.

One of the summer's last musical gasps, this indie-inflected event in the grounds of Madrid's Complutense University includes the only Spanish concert of proto-hipster Beck. Also playing this year are British singer Jake Bugg, Bombay Bicycle Club and Spain's very own Lourdes Hernández, better known as Russian Red.

The Kaiser Chiefs and DJ Mark Ronson are set to take over the popular resort of Magaluf in September. The Kooks will also return to the Rocks stage, after headlining the 2010 Edition. Ibiza also play hosts to a few last gigs before summer in Spain's Balearic Islands wraps up.

This six-week long festival features over 100 concerts from local and international acts at venues around the city. Some of the concerts are even free.

This festival in the capital of the Basque Country is internationally recognized. In the past it has hosted the International premieres of Vertigo (A.Hitchcock) and welcomed stars such as Audrey Hepburn and Elizabeth Taylor or more recently Meryl Streep and Brad Pitt. This year, Denzel Washington will open the 62nd Edition of the Festival and receive the prestigious Donostia Lifetime achievement Award.

Twenty-four national teams including Spain, France (current European champions) and the United States (reigning world champions), will compete for the Basketball World Cup with knock-out stages taking place in Granada, Seville, Bilbao and Las Palmas de Gran Canaria before the competition moves to Barcelona and Madrid for the business end of things.

The Vuelta is one of the world's biggest bicycle races, along with Le Tour de France and the Giro d'Italia. This year’s tour kicks off in Jerez de la Frontera and will wrap up in Santiago de Compostela after three weeks of brutal competition. Last year Chris Horner, a 42-year-old American rider, won the Tour, becoming the oldest winner of any cycling grand tour. But Spaniards will be hoping that local hero Alberto Contador will take this year's crown.

While 41 recognized designers will show off their latest collections on the catwalks, the 58th edition of Madrid’s Fashion will also give some twenty emerging talents the chance to show what they can do. Interesting innovation this year: the fashion shows will be broadcast live at Conde Duque and near Plaza de Colon, two emblematic venues in Madrid. Watch out for Madrid's 'Fashion's night out' on September 12th with stores offering special discounts.

Find out more at  www.ifema.es/