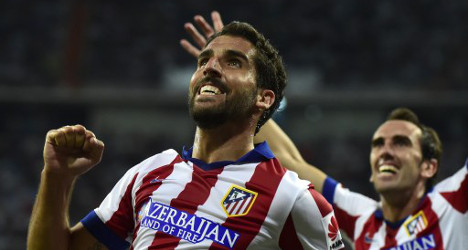 Atlético got a precious away goal to take into the return leg at the Vicente Calderon on Friday when García flicked home a late corner from close range. Photo: Gerard Julien/AFP

Rodriguez had surprisingly started on the bench, but replaced Cristiano Ronaldo at half-time when the World Player of the Year was substituted due to a muscle injury.

However, Atletico got a precious away goal to take into the return leg at the Vicente Calderon on Friday when Garcia flicked home a late corner from close range.

Real boss Carlo Ancelotti did though allay fears that Ronaldo's injury could rule him out for a prolonged period of time.

"He had a strain after the first-half and he wasn't comfortable. We will evaluate him tomorrow and do all the proper checks, but it doesn't appear anything too serious," said the Italian.

And despite once again finding it difficult to break down Atletico's dogged defence, Ancelotti is confident that a repeat performance will see his side emerge victorious on Friday.

"Atletico have a small advantage because we have to score in the Calderon.

"We have the potential to score goals at the Calderon and we will try. If we repeat the way we played today we will win the Super Cup."

Atletico coach Diego Simeone hailed his side's work rate and expressed his surprise that compatriot Angel di Maria didn't start the game as he only featured as a late substitute.

Di Maria has been rumoured with a move away from the Spanish capital given their wealth of attacking options with the arrival of Rodriguez, but Simeone claimed he is even more vital to Real than Ronaldo or Gareth Bale.

"In the first-half despite defending close to our area we had three or four chances to score a goal," he said.

"The second half was more or less the same, with a little bit better play from Madrid with the introduction of Di Maria.

"That was logical because he is the best player they have. It is a important draw and allows us to play a for the trophy at home with a 50-50 chance."

Despite leaving Rodriguez and Angel di Maria on the bench from the off, Real boss Carlo Ancelotti saw his side dominate possession in the opening 45 minutes against a typically physical Atletico side.

However, Real created precious little in front of goal and it was Atletico who had the better chances in the first-half as both Mario Mandzukic and Saul Niguez forced Iker Casillas into smart saves down to his left.

With Rodriguez on for the stricken Ronaldo, Real instantly made a greater impression on the Atletico goal as Bale's powerful right-footed effort was beaten away by Moya.

There was an escape for the Atletico 'keeper on his debut 20 minutes from time, though, as he could only parry Bale's fierce free-kick back into the danger area and Toni Kroos blazed over with the goal at his mercy.

Real continued to push in search of the winner and thought they had it on 80 minutes when Rodriguez fired home with the aid of a deflection off Cristian Ansaldi.

Yet Atletico responded with the kind of spirit that willed them to the La Liga title last season as the unmarked Garcia flicked home Koke's corner.

Real will now have to score at least once when they visit the Calderon later in the week if they are to continue their quest for six trophies this season having already collected the UEFA Super Cup with a 2-0 win over Sevilla last week.