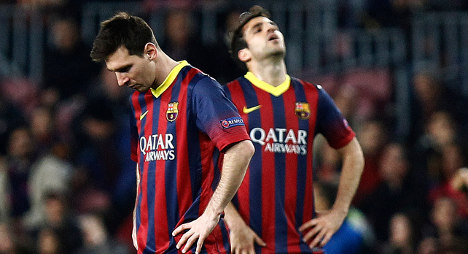 "Barcelona are to serve a transfer ban which will see the club prevented from registering any players at both national and international level for two complete and consecutive transfer periods, starting with the next registration period (January 2015) given that the appeal of the club had been granted suspensive effect by the chairman of the Fifa Appeal Committee,” reads the statement released by the world footballing body on Wednesday.

Fifa imposed the sanction on Barça in April 2014 for breaching rules on the registration of minors, announcing in a statement that the ban would be temporarily suspended allowing the Catalan side to sign players during the summer transfer window which opened on July 1st.

FC Barcelona will now also have to pay a fine of CHF 450,000 (€370,000) and have been given a period of 90 days from August 20th in which "to regularize the situation of all minor players concerned," Fifa announced.

Barcelona said on Wednesday they will appeal to sports' highest court after FIFA refused to overturn a transfer ban, a decision the club described as an "affront" to its famed youth academy.

"FC Barcelona announces that it shall continue defending its interests before the highest sporting authority, in this case the Court of Arbitration for Sport," the club said in a statement.

The club said they disagreed with FIFA's decision to maintain a suspension on transfers as a penalty for breaking the rules on transfers of minors, fiercely defending the ideals of its renowned youth academy, La Masia.

"FC Barcelona may not in any way share a resolution that is an affront to the spirit of our Masia, a world renowned example of academic, human and sporting education," Barcelona said.

Barcelona can continue to sign players until the end of the current summer transfer window, but will not then be able to recruit any new players in the next two windows, in January and next summer.