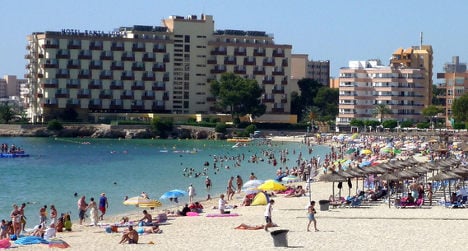 The young man suffered multiple injuries and was rushed to the Majorca's Son Espases hospital in a serious condition. File photo: Effervescing Elephant/Flickr

The man aged in his early to mid-twenties fell up to 25 metres (82 feet) from the fourth floor of the building, local daily Diario de Mallorca reported.

The accident occurred at around 10am at an apartment complex in Martin Ros García street, emergency services said.

The young man, whose name was not given, is thought to have been trying to climb from one room to another via the outside of the building when he fell.

He suffered multiple injuries and was rushed to the Majorca's Son Espases hospital in a serious condition.

It is not known whether he had been drinking at the time of the accident.

The man is is the latest victim of the craze known as 'balconing' in which tourists attempt to jump from one apartment balcony to another, or from a balcony to a swimming pool below.

The practice was recently banned by Majorca's Calvià municipality, which is trying to crack down on some of the wilder excesses of British tourists who flock to Magaluf every summer.

The council has also capped numbers for the popular pub crawls in the area, while shutting down for a year another bar which was the scene of an infamous sex-for-drinks incident in which a young woman was filmed performing oral sex on over 20 other guests at the venue.