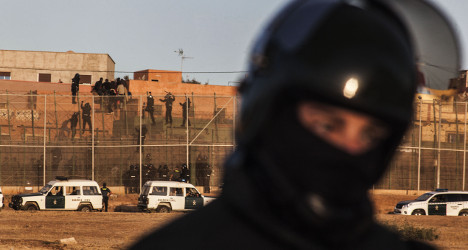 HRW published a video which it said showed Spanish officers on August 13 beating immigrants on the middle layer of the fence and frogmarching two people from Spanish territory back through a gate in the fence to Morocco.

"Spain's right to secure its borders doesn't give it carte blanche to abuse migrants," said Benjamin Ward, deputy director of HRW's Europe and Central Asia Division, in a statement.

"The government in Madrid and local authorities in Melilla need to stop these illegal pushbacks and take action against any Guardia Civil officers who use excessive force against migrants."

The statement added: "Summary returns deprive migrants of the right to seek asylum or other international protection, and make it impossible for the Guardia Civil to conduct age screenings for undocumented migrant children, as Spanish law requires."

Hundreds of people stormed the Melilla border fence from August 12th to 14th, the latest in a series of attempts by migrants trying to reach Europe to escape war, oppression or hardship in Africa.

Over recent months thousands have tried to scramble from Morocco into Melilla and the nearby territory of Ceuta, two Spanish cities on the Mediterranean coast which have Europe's only borders with Africa.

Spanish government officials in Melilla said their border guards displayed "exemplary and humanitarian conduct" and dismissed the videos of alleged abuse as "partial images aimed at stirring controversy", in a statement on Monday".

Melilla is in many ways a model of how to manage such dramatic migratory pressure," it said.

"It is not fair to offload on this city, nor on the security forces who have to defend Europe's southern border, all the weight of a problem which goes beyond Melilla and affects the whole of the European Union."