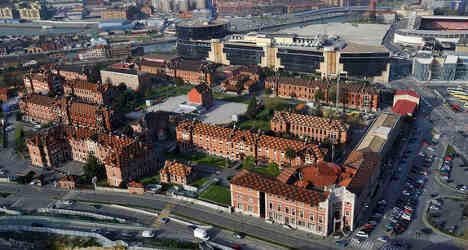 The middle-aged man is being kept in an isolation ward at the Bilbao's Basurto Hospital (pictured). Photo: Mikel Arrazola/Wikimedia Commons

The middle-aged man who is being kept in isolation at the city's Basurto hospital does not have the deadly disease, El Correo newspaper reported on Tuesday.

However, tests carried out at Madrid's Carlos III hospital indicated the man who was in Sierra Leone on business may be suffering from malaria, which presents with symptoms similar to Ebola.

His condition has been described as stable.

In related news, a man who recently tested negative for the deadly Ebola virus in Alicante has been told he has free to go home.

A third man, Spanish priest and missionary Miguel Pajares became Europe's first victim of the latest outbreak of Ebola when he died in Madrid recently after being repatriated from Liberia.

The outbreak of the disease is beginning to cause chaos in the African countries affected.

Club-wielding youths attacked an Ebola quarantine centre in Liberia's capital of Monrovia on Sunday, forcing 17 infected patients to flee and striking a fresh blow to efforts to contain the worst-ever outbreak of the virus.

Liberia has since admitted the patients are missing, according to UK national broadcaster the BBC.

The attack highlighted the challenge faced by health authorities struggling against the epidemic that has killed 1,145 people since it erupted in west Africa early this year, spreading panic and fear among local populations.

Doctors and nurses are not only fighting the disease, but a deep mistrust in communities often in the thrall of wild rumours that the virus was invented by the West.

"They broke down the door and looted the place. The patients have all gone," said Rebecca Wesseh, who witnessed the raid in Monrovia's densely populated West Point slum.