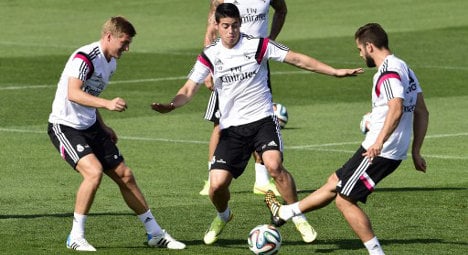 "We have to try to compete with Sevilla, Valencia and Athletic Bilbao for the Champions League places," he claimed on Monday ahead of his side's Spanish Super Cup first-leg against Real on Tuesday.

"With €95 million we have signed nine players, Real Madrid have signed two players for 95 million. That is the difference."

The other major difference is that success has also brought Atletico the struggle of holding onto their best players. Top scorer Diego Costa and Filipe Luis have joined Thibaut Courtois in returning to his parent club Chelsea after a three-year loan spell in the Spanish capital.

That money has been reinvested in a promising attacking trio of Antoine Griezmann, Mario Mandzukic and Raul Jimenez, but the major coup of the close season for Atletico has been holding onto the likes of Koke, Diego Godin and Miranda despite interest from Barca and Bayern Munich.

By contrast, Real have splashed over €100 million on the squad that won both the Champions League and Copa del Rey last season without having to sanction any significant sales, although Angel di Maria could exit before the end of the transfer window.

An already oversubscribed midfield has been bolstered by World Cup winner Toni Kroos and the competition's top goalscorer James Rodriguez, whilst Costa Rican goalkeeper Keylor Navas will rival Iker Casillas to be number one.

"I think we have a better team than last season because we have signed three players that add quality to the team," Real coach Carlo Ancelotti said on Monday.

Of the three title contenders, though, it is Barcelona who have undergone the most significant change as they look to bounce back from a first trophyless season in six years.

The first change at the Camp Nou over the summer was the coach as they turned to former captain Luis Enrique to replace Gerardo Martino in the hope he can have the same impact as his former teammate Pep Guardiola did in charge.

With a two transfer window ban only temporarily suspended, Barca have also been very active in the market with the capture of controversial Uruguayan striker Luis Suarez leading their 150 million euro outlay.

Suarez won't even be able to play until late October after his appeal against a four-month ban for biting Giorgio Chiellini at the World Cup was rejected by the Court of Arbitration for Sport last week.

However, he could return for a mouth-watering first El Clasico clash between Real and Barca at the Santiago Bernabeu should the game be scheduled for Sunday, October 26.

Enrique's main task will be finding a blend for all of Suarez, Lionel Messi and Neymar to function together as all three look to shake off a disappointing end to their respective World Cups.

For all their attacking talent, questions also remain over Barca's defence despite the expensive recruitment of Jeremy Mathieu from Valencia and Arsenal captain Thomas Vermaelen. Goalkeepers Claudio Bravo and Marc-Andre Ter Stegen will also battle to succeed the departed Victor Valdes as number one after being signed for €12 million apiece.

Outside of the big three, Europa League winners Sevilla have made the most significant moves in a bid to get back into the Champions League as they have brought in Barca loanee Gerard Deulofeu, Argentine international Ever Banega and Liverpool reject Iago Aspas.

Valencia should also be back in contention for the top four after Singaporean businessman Peter Lim finally completed his takeover of the club with Spanish under-21 international striker Rodrigo their big name signing of the summer.