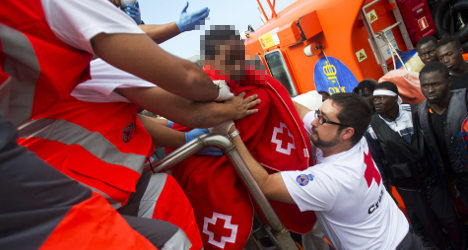 The baby girl, just months old, was travelling on the boat  crammed with other would-be African immigrants to Spain when she was rescued.

That vessel was one of dozens to attempt the crossing from Morocco to Spain recently as over 1,000 immigrants made use of calm summer seas and lax Moroccan policing to aim for a better life in Spain.

However, the parents of the baby girl were not on board after they allegedly become embroiled in an altercation with Moroccan police officers just before the tiny boat departed.

Red Cross rescue workers took care of the infant, christening her Princesa before handing her over to authorities in the southern Spanish province of Andalusia.

Now those authorities say they found the mother of the girl in Morocco, according to Spain's 20 minutos newspaper.

The woman has been informed her child is safe and sound, the daily reported.

Andalusian authorities will now look at whether to send the girl back to Morocco or bring her mother to Andalusia.  The interests of the child were paramount, they added.

The girl, whose real name is Fatima according to Spain's El País newspaper, is currently staying with a family, but more information has not been made public.