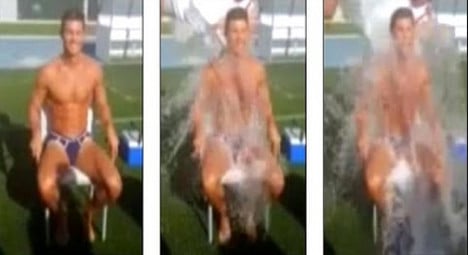 The next celebrities to have to step up to the ice bucket challenge or pay an €100 donation are Ronaldo’s nominee’s Beyoncé, Jennifer López and Lil’ Wayne. Photo: YouTube/Cristiano Ronaldo

CR7, as he is known to his fans, was nominated by former Manchester United team mate Darren Fletcher.

The Portuguese star accepted, and as you will see below, he endured the ice-bucket challenge with relative composure.

Ronaldo is the latest big name to join in a craze started by 27-year-old former college baseball player Pete Frates, who for the past two years has suffered from amytrophic lateral sclerosis (ALS).

A neurodegenerative disease which causes muscle atrophy, difficulty with speaking and breathing, ALS has gained huge global awareness since Bill Clinton, Taylor Swift and LeBron James followed in Frates’s footsteps and posted videos of themselves being drenched in a bucketful of icy water.

The activity has gone viral on social media over the past two months, the American ALS reporting an eightfold increase in donations (€10M-$13.3M) last July compared to a year ago.

The next celebrities to have to step up to the ice bucket challenge or pay an €100 donation are Ronaldo’s nominee’s Beyoncé, Jennifer López and Lil’ Wayne.

Think CR7 likes taking his top off a bit too often? Eight of the best: Topless Ronaldo memes