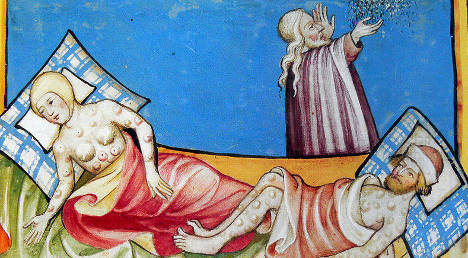 The Black Death is believed to have killed up to 30 million people in Europe between 1348 and 1354. Photo: Fingalo/Wikimedia

Sant Just i Pastor Basilica, already the site of Roman ruins and Visigoth architecture, is now also the only place in Spain known to house a Black Death burial ground.

A team of archaeologists, who first stumbled upon the mass grave in 2012, will begin the next phase of excavation in September in the hope of finding out more about how the Bubonic plague affected 14th century Spain.

Initial investigations showed that up to 400 bodies were tightly packed into the grave measuring no more than 3.5 metres (11 feet) in width by 1.5 metres in depth.

Many of these bodies were removed during a 15th century extension of the church, archaeologists believe.

The 120 corpses that remain to this day were laid to rest in ceremonial style, unclothed and wrapped only in quicklime-soaked linen to prevent disease and the smell of rotting flesh.

“When we began to exhume the remains it was clear that this was a mass grave from the time of the epidemic,” excavation head Julia Beltrán told Spanish national daily El País.

“Bones had been very well preserved, and none of them showed any signs of the kind of damage that could have killed somebody.

“What’s more, there were people of both sexes, children, and of all ages. The victims were all buried within a short time frame.”

Other mass graves have been found in London, Prague, Poitiers and Marseille, but Barcelona’s Basilica shows how efforts were made in Spain to bury plague victims in church grounds rather than in new Black Death-only cemeteries.

That in turn explains why archaeologists found the grave to be so densely-packed: 11 rows of bodies.

The Black Death is believed to have killed up to 30 million people in Europe between 1348 and 1354.

During this period, Spain’s population plummeted from 6 million to 2.5 million.