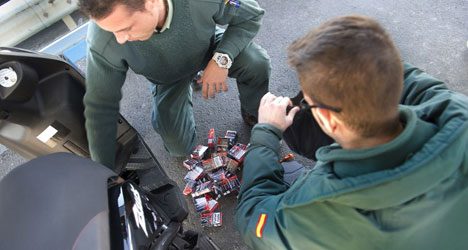 More than 10 million packets of cigarettes were seized by Spanish police at the Gibraltar border in 2013. Photo: Marcos Moreno/AFP

The €700-million figure is contained in a confidential new report by the EU's anti-fraud agency Olaf, cited by Spain's El País newspaper on Thursday.

The report also fingers specific companies involved in the illegal tobacco trade, according to the daily.

Olaf's 400-page report is the result of investigations into a complaint concerning increased smuggling of cigarettes across the frontier between Gibraltar and Spain in the period 2009-2013, an OLAF spokesperson told The Local recently.

Spanish media outlets said recently Gibraltar's cigarette imports tripled from 2006 to 2011, with 110 million packets coming into the territory in 2012 alone.

Much of this tobacco is thought to be smuggled into Spain.

There are also indications organized crime is involved in the trade, Olaf told The Local, calling for Spain and Gibraltar to tackle the problem.

Findings of the Olaf report were sent to Spanish and UK authorities, and prosecutors from Spain's High Court on Wednesday began laying the ground work for a judicial investigation of the matter.

UK authorities responded by saying Gibraltar was already tackling the problem of tobacco smuggling and was willing to work closely with Spanish authorities on a solution.

They also stressed the role of organized Spanish criminal gangs in the lucrative trade.