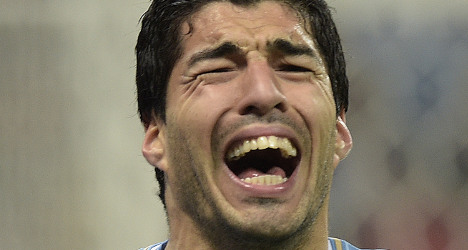 A statement released by the Catalan club read: "Following the announcement of the verdict by the Court of Arbitration for Sport (CAS) regarding the appeal against the sanction imposed on Luis Suarez by FIFA, FC Barcelona hereby announces that the player will join the first team's training session scheduled for Friday at 9.30 AM CET (0730 GMT) in the Ciutat Esportiva Joan Gamper.

"Likewise, the public presentation of Suarez as a new FC Barcelona player will be held on Monday at the Camp Nou, on occasion of the Joan Gamper Trophy match."

The CAS upheld Suarez's four-month ban from playing in competitive games as well as his nine-match international suspension, but it did allow him to train and play in unofficial matches.

And that means he could make his debut against Mexican club Leon in the Gamper Trophy, the traditional curtain-raiser to the season at the Camp Nou.

There will be a temptation to give the 27-year-old a run-out against Leon as it will be Barcelona's final friendly before their first league game of the new season against Elche next weekend.

Suarez has reportedly been training on his own in an unknown location in Catalonia since completing his €95 million (£75 million, $127 million) move to the Camp Nou from Liverpool last month.

He will be available to play in competitive matches from Saturday, October 25th, meaning his official debut could come in the first Clasico of the campaign against Real Madrid at the Santiago Bernabeu, which has been scheduled for that weekend.

Suarez was banned for biting Italy's Giorgio Chiellini at the World Cup but despite the player being allowed to resume training, Uruguayan football officials are still "frustrated" with the handling of the controversy.

Uruguayan Football Federation lawyer Daniel Cravo told Sky Sports News: "We are really frustrated — we understand that the behaviour of Luis Suarez in that match deserved to be punished but we don't think that it was the worst behaviour of a player in a World Cup.

"There have been worse situations and the players were not sanctioned at this level but of course we respect CAS' decision.

"We have to wait for the reasons and we are sorry for not having achieved what our client wanted from us. I don't want to criticise the decision because I don't know the grounds, that's something we are interested in checking."

Suarez has never explained his propensity to bite opponents.

He earned a ten-game ban for biting Chelsea's Branislav Ivanovic in 2013, after being sidelined for seven matches with Dutch club Ajax in 2010 for the same offence against PSV Eindhoven's Otman Bakkal.

On Wednesday, English Premier League boss Richard Scudamore said that while Suarez was a great footballer, he was also "an accident waiting to happen".