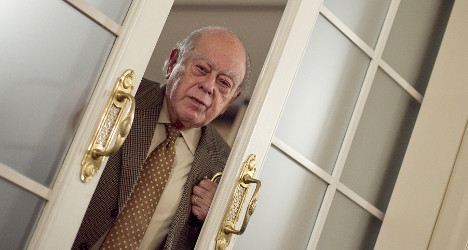 Jordi Pujol, who was president of Catalonia from 1980 to 2003, stunned supporters when he announced last month that his family had hidden an inheritance from his father in offshore accounts for the past 34 years.

The 84-year-old, who in recent years has become a leading advocate of Catalonia's independence from Spain, did not say how much money he had hidden abroad to avoid tax but Catalan daily newspaper La Vanguardia reported that €4 million was kept in a bank account in Andorra.

But in its lawsuit Manos Limpias, which means "Clean Hands" and which takes credit for starting many of the big corruption probes making headlines in Spain, accused the Pujol clan of more than just tax evasion.

It said part of the money stored in foreign accounts came from the "systematic collection of illegal commissions in exchange for awarding contracts for public works and services between 1980 and 2003."

"We could be looking at a case of large-scale fraud which led to gains through the continued practice of the crimes described that could vary in a range between 1.8 billion to 3.0 billion pesetas," legal documents said, in a reference to the currency used before the euro was introduced. The figure corresponds to between €10.8 million and €18 million.

Spain's tax office last week summoned Pujol for questioning over his admission that he had stored money in secret foreign bank accounts.

In a separate move a Barcelona court asked the former Catalan leader to hand over a copy of his father's will.

The case comes as the Catalan government plans to hold a referendum on independence from Spain on November 9th, putting it at odds with the national government which insists the move is illegal.

Manos Limpias, which was modelled on, and named after, the Clean Hands movement launched by Italian prosecutors in the early 1990s, has filed dozens of lawsuits in cases of alleged corruption since it was founded in 1995.

But it has also filed a string of controversial cases such as complaints against abortion clinics which critics argue betray a right-wing agenda.