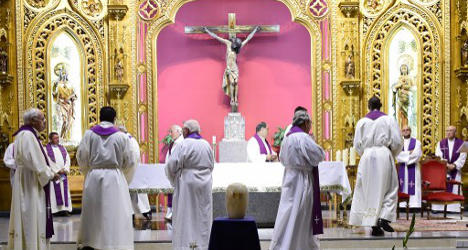 Clergymen perform duties behind the urn containing the remains of the late Spanish priest Miguel Pajares during a funeral ceremony in Madrid on Wednesday. Photo: Gerard Julien/AFP

A black hearse transported an urn containing missionary Miguel Pajares's ashes to the chapel of the San Rafael hospital in Madrid, which was decorated with floral arrangements, including one sent by Spain's royal family.

The priest's remains were incinerated in a sealed coffin shortly after he died on Tuesday at the age of 75. No autopsy was conducted so as to reduce the risk of contagion.

Pajares had been in isolation at Madrid's Carlos III hospital since landing in Spain on a military jet last Thursday and he had been treated with an experimental US serum, ZMapp.

The Spanish priest contracted Ebola at the Saint Joseph Hospital in the Liberia capital Monrovia where he worked with infected patients.

Many in Spain consider him to be a hero and the crowd at the funeral services included ordinary Spaniards who did not know him along with government and religious officials.

"We are all human, we need each other, we give our lives for others," said Ana Maria, a 67-year-old from Madrid who attended with her sister Irene Gonzalez-Arnau Campos, 63, who came from Spain's Canary Islands for the funeral service.

Health Minister Ana Mato, who has been criticized for her absence from Madrid while Pajares was in hospital, offered her condolences to the family at the service and said the hospital room where Pajares died was being throughly disinfected.

"All protocols are being followed to the letter," she told reporters.

The Ebola epidemic in west Africa, the worst since the disease was first discovered four decades ago, has killed more than 1,000 people since early this year, according to the World Health Organization.

Cases have so far been limited to Guinea, Liberia and Sierra Leone, which account for the bulk of victims, and Nigeria, where three people have died.