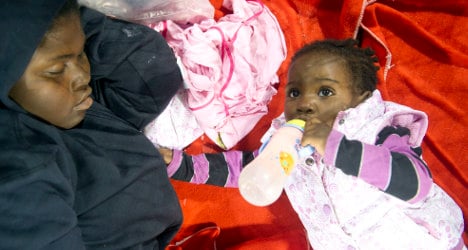 An African migrant lies with her child in a sports centre after being rescued by the Spanish coast gaurd vessel in Tarifa on Tuesday. Photo: Marcos Moreno/AFP

The coast guard said it intercepted 78 small boats carrying 755 sub-Saharan Africans across the Strait of Gibraltar, part of a surge of migrants crossing the Mediterranean to reach Europe's southern shores.

The migrants included 95 women and 20 children, the coast guard said in a Twitter message.

They all appeared to be in good health and were taken to Tarifa, Spain's southernmost port.

Spain's coast guard has picked up a total of 1,122 migrants in the Strait of Gibraltar since Saturday, including 299 on Monday.

Authorities blamed the rise in the number of migrants trying to cross the Strait on traffickers seeking to take advantage of calm summer seas and the end of the Islamic holy Ramadan month of fasting on July 28th.

"The exact same thing happened last year. After Ramadan there was a wave of migrants," the Spanish government's representative in Cadiz, Javier de Torre, told reporters.

"Mafia and organized crime groups dedicated to people smuggling take advantage of the good weather to carry out these sort of misdeeds."

The migrants were being temporarily sheltered in a municipal sports centre in Tarifa.

Morocco's police and coast guard were had not been on patrol since Monday, the daily said citing sources from within the European Union agency for external border security Frontex.

Spain's interior ministry will hold an emergency meeting on Wednesday to look at a possible stepping up of border security, Spanish news agency Europa Press reported.

Local officials braced themselves for the arrival of more migrants.

"We don't know what is going to happen in the coming days but we know we are going to have good weather for at least three or four more days. With the little that we know we expect this avalanche will continue or even increase," said Tarifa Mayor Juan Andres Gil.

The Strait of Gibraltar separates Spain and Morocco by only 15 kilometres (nine miles), making it one of the key smuggling routes for illegal immigrants crossing into Europe.

Italy has also faced a mounting influx of African migrants — the Italian navy rescued more than 2,000 migrants over the weekend from boats in the Mediterranean.

While many attempt to reach Europe by boat, a smaller number make a bid by land.

About 30 managed to get through in the first wave. Another 50 were taken to an immigration detention centre. Three migrants were injured in the attempt.

Immigrants from all over Africa regularly try to enter the city, which is on the Mediterranean Sea, in the hope of achieving a better life in Europe.

Spain has beefed up border security in the two territories, which have the European Union's only land borders with Africa, since 15 migrants drowned in February while trying to swim to Ceuta, another Spanish exclave bordering Morocco, from a nearby beach.